The boxes are going out!

Well - Elizabeth Badin and I figured out that my inexpensive recycled wrapping paper and recycled printing paper don't do well when you are trying to make a box look somewhat nice.  The printer paper showed everything (especially the glue) and the wrapping paper was so wrinkly and thin that I didn't see it holding up to all the canned goods we will be getting (hint hint hint). So my darling Tim picked up a huge roll of contractors paper and I took to printing on construction paper instead of buying a bunch of heavier weight paper.  Trying not to spend a lot of money on stuff like craft supplies when I can use the money somewhere else!

The boys and I met with Angelle of The Warren Sentinel yesterday to drop off a box at the library.  She wanted to take pictures of us putting out the box.  Zac was melting down in the middle of the library because we weren't heading to the children's section (those pop-up books don't read themselves!).  Kyle and Liam were hamming it up for the camera by climbing into the donation box.  It was fun - considering we had already been at a party and my kids had woken up before the crack of dawn.  Zac got to read a few pop-up books before Liam fell apart and we checked out a few books and headed home. 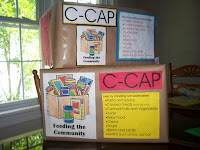 Today we will again be meeting Angelle - this time to drop boxes off at the two branches of the Front Royal Federal Credit Union and at the Blue Ridge Barber Shop.  I am excited to get the boxes out and start collecting more canned goods for the C-CAP Food Pantry.  So when you are on South Street - swing by the Barber Shop or FRFCU and drop off some food.  And when you are heading to the library - the box is right in the hallway near the local fliers.  I will keep you updated on more locations as we add them.  I know McAlister's is going to have a box and I believe Gold's Gym as well.

It only takes a couple dollars to make a meal for someone!  I spent $13 at Wal-mart and picked up tons of food to donate.  That's how much we spend on a trip through a fast food drive thru.  So while we are spending that much on one meal that isn't satisfying or healthy - we could actually be putting together several meals worth of non-perishables.  Remind me of that next time my kids are asking for the light-sabers in the McDonald's Happy Meals.
Posted by Unknown at 12:05 PM