Award to the Fire Department 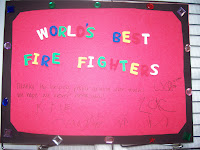 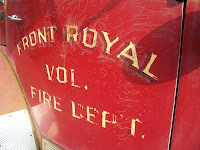 Today we had the pleasure of delivering a homemade award and homemade cookies and muffins to the Front Royal Volunteer Fire Department.  We met the Chief Engineer who had been volunteering with the FRFD for 33 years.  He explained the fire trucks and told us some about the station (which is just a couple of blocks from us).  He said that the station gets about 4000 calls a year!  They got a call when we were leaving and another 15 minutes later on our way home.  Although hearing sirens is a common thing for us living in a town as small as this, if you asked me I wouldn't have guessed that they were so busy!  All the more reasons to thank them for always being there.  I didn't share my cat in a tree story because I was too busy pulling Zac out from underneath the ambulance.  And answering Kyle's 75000 questions about why we wouldn't let them play in the fire trucks or climb all over the ambulance. 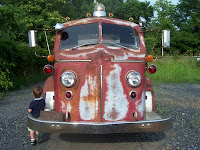 An ambulance was coming into the garage as we were talking and then the fire trucks were called out so we had to head out but it was such a neat experience!  I attended a couple of EMS sessions as a teenager with my best friend Jessie and thought it was really wild.  I learned how to hold C-Spine and use the window punch and the jaws of life to rescue someone from a car accident.  It was such an amazing learning experience but definitely not something for me!  It takes a certain kind of person to be able to go to work (or volunteer on your days off) to help people in their worst situations. I definitely applaud them and, like Kyle asked me to write on the award, hope we never have to use them. 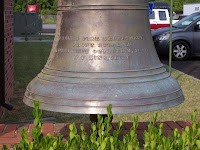 The fireman told us about the older trucks they had outside the station and we walked out to look at them before leaving.  It was so neat to see the firetruck from the mid 1950's that they continued to use until the late 1980s.  They replaced it with a new truck in 1988 which they still sometimes use!  Of course I took lots of pictures and we were invited to come back anytime.  Its nice to have such a reception.  At out MOMS Club of Front Royal board meeting today we were discussing hosting the fire department at our annual open house.  The club has done so in the past and I think it would be a fun thing to do again.  Who doesn't love a fire truck?
Posted by Unknown at 7:16 PM