Thankful Thursday - After Halloween and the Hurricane

Let's start with the most obvious on this dry Thursday afternoon.  I am thankful that my friends and family were largely untouched by Hurricane Sandy.  I was trying to not obsess about the storm but wanted to stay on top of storm coverage and be completely prepared to lose power for several days with 3 kids under the age of 7.  So of course- with all that - obsess I did.  I shopped and shopped to make sure we had battery-powered light sources, dog food, diapers, water (even though we don't lose water when we lose power), boxes and boxes of Cheez-its and Triscuits, and tons of hummus and peanut butter.  Plus fruit and soup and vegetables to saute for wraps and sandwiches.  I watched NBC 4 and checked Twitter every 30 minutes.  I worried about the dog next door who's owner moved the dog in although he and his family haven't moved yet.  This poor dog spent a cold, rainy Monday shivering and curled up in his half doghouse.  I finally called Animal Control after noticing the owner's truck come and go several times throughout the day without taking the animal indoors.  Animal Control came and then the owner came and put the dog in the shed or garage.  I felt like I could breathe again!  I was so relieved that this poor dog wouldn't have as miserable a night as he would have exposed to the elements.  Definitely thankful for the animal control officers who must have some of the hardest jobs ever.
My two younger boys ended up falling asleep early in the evening on Monday so I played Battleship with Kyle and then Go Fish with Star Wars cards.  He creamed me.  I bowed out and asked Tim to take over and Kyle destroyed him in War.  I read to Kyle from The Hobbit at bedtime and gave him a headlamp and flashlight in case the power went out.  I assured him I would wake up and camp out with him if it did.  I tried to relax knowing I had my family at home and that we still had power and no trees on our house.  I had an IPA, texted with some friends and went to bed early.  Tuesday brought us light rain and cooler temperatures but we didn't get snow like some friends in the mountains.  So I spent that day checking Twitter and seeing the devastation north of us.  I checked in with my family and was so thankful that everyone from Richmond to Brooklyn was doing fine and hadn't even lost power.

We were able to move on from Sandy unlike those north of us.  We sent the boys to school on Wednesday and met at a friend's Wednesday night for a gathering where the parents got to have a beer and the kids got to run around outside before we set out trick-or-treating.   The kids had a blast and were ready to head back home about the same time as me.  Tonight is Cub Scouts and we will be touring the Government Center and learning about the changes in our town from 50 years ago. 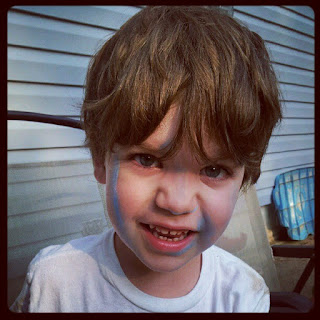 Spending 4 days cooped up inside with my boys (with the exception of a great Halloween party on Saturday night) means that there is a little too much TV, a little too much bickering, and too little space.  I should have planned some fun activities for us to do, but Tim was in NYC over the weekend and I was still getting over my strep and some days I just get the bare minimum done.  One thing that I was able to enjoy was Zac's voice!  He was singing so much, reciting songs from You Tube videos that he started watching in preschool and reading books aloud.  He also surprised me on Tuesday by saying "I want to have milk please."  I was so excited I jumped up and hugged him like the maniac mom I am!  Its so exciting to hear him make a sentence without prompting.  And its not even one I ask him to use!  He used it again later asking for peanut butter and I was just the proudest Mom ever.  It makes me realize once again how lucky we are to have the amazing teams he has had at school these past 3 years.  From his bus drivers and aides to his teachers and therapists.  Everyone works so hard for my child each day and I get to enjoy all these little moments because of that.

And I am also thankful for moments like these: 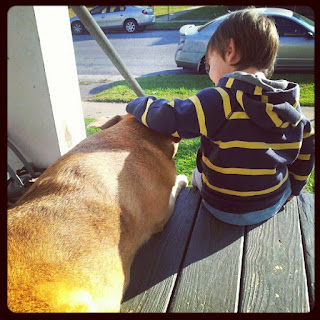