One Ear Up and One Ear Down

Before I had the amazing gift of being a Mommy to three adorable little boys - I was the adoptive Mom to my Charlie Brown.  I have always been an animal lover and we had a series of pets growing up.  Rabbits, dogs, cats, guinea pigs, cannibalistic gerbils, and a turtle.  My brother even rescued a baby fox which we kept hidden the basement.  And while they were all wonderful or crazy in their own special ways - none of them was a life-changing as my Charlie. 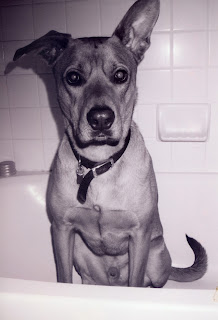 Tim and I had not been dating very long when he learned that I wanted a dog.  He promised me one for my birthday and I let him know that he couldn't go back on his word or I would be seriously crushed.  I had my heart set on a rottweiler (my high school boyfriend's roommate had one and I fell in love).  Eventually I wanted to have 2 rotts - a girl named Lola and a boy named Roscoe.  But we fell in love when we saw Charlie (who was unfortunately named Baby Boy) at the Prince William County Animal Shelter.  He was 5 months old and had only been in the slammer for that one day.  He was small and trembling and so cute that we nabbed him just before the couple behind us picked him.  We paid the adoption fee and carried him out with a piece of twine for a leash.  We stopped at the pet store to get all the things we would need and the poor dog was just too traumatized to walk.  We went back to my apartment in Manassas and prepared for playing with the puppy and leisurely walks around the neighborhood.  This was the time when the DC Snipers were out terrorizing the area and there was actually a shooting in Manassas on that very night.  That, combined with the fact that Charlie was too scared to go down the apartment stairs, made for a stressful beginning.

I didn't know what to name him. I kept coming back to Charlie Brown and Tim teased me about it but I decided that the name was a perfect fit and it stuck.  He has since acquired lots of nicknames and responds to them all:  Bubba, Charles Barkley, Barks, but he won't respond to Chuck (not that I blame him).  Everyone who has met Charlie has fallen in love.  He is sweet and calm and patient.  He is playful and very sensitive to my mood.  If I am upset or not feeling well - he is the first to comfort me.  He is quick to roughhouse with a man - but with me or the boys he is much more cautious.  He loves toys that squeak and has no interest in tennis balls.  He craves comfort and has adopted 2 of my blankets as his own.  He uses his nose and paws to arrange the blankets on his bed to achieve the right balance. 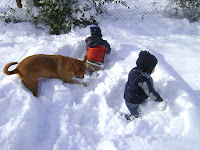 Charlie gets so excited when snow is falling.  He jumps around outside (he doesn't get that he is 9 years old) and tries to catch snowballs that we throw up the air.  He digs in the snow until his nose is frosty white.  No matter the weather he is a sucker for a thrown stick.  He lets the kids take the stick and throw it for him and he even tolerates the twigs they bring him and he pretends its just as good as a bigger one.  He leaves food that ends up on the floor (which there is plenty of with all the boys) unless it is chicken - then he can't restrain himself. 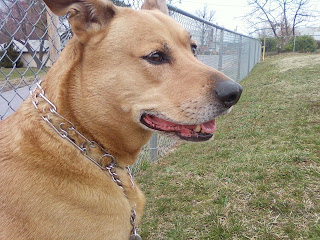 Charlie is a great judge of character and is protective of me and the boys.  He growls if someone comes near the yard that he doesn't know and wags his tail and jumps around if it is someone familiar.  He uses his tough puppy bark if he is outside and we are inside to scare away possible infiltrators.  His bark is only used when necessary - or when there is a raccoon - but who can blame him!  He has a groundhog friend that comes and visits and they just calmly watch each other - it is really very cute.  Squirrels on the other hand had better keep to the other side of the fence.  They don't get any slack.

All in all my dog is amazing.  I love and adore him as much as my boys and he is definitely part of our family.  He has welcomed three boys home from the hospital and has lived in 3 different places with us.  He is still afraid of going downstairs and has yet to venture into our basement after 4 years of living here.  He won't leave the porch unless he is told to and likes to greet the boys coming home from the school bus.  He rolls over if you ask him to show you his belly and he hates baths but loves being clean.  His best friend is a dog named Keepa and they love to play in the river together.  I am so lucky to have Charlie in my life and he has definitely helped me get through some tough times!